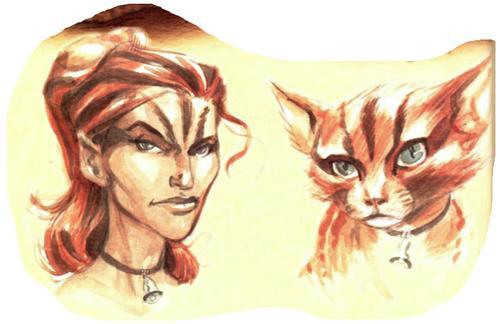 Tibbits (also known as catweres) are small, humanoid creatures that have the ability to turn into a common house cat. They arose from felines kept as familiars in ages past. The powerful magic that allows a familiar to gain intelligence and magic abilities slowly filtered from one generation of cats to the next. Whether tibbits evolved from a natural process, divine intervention, or a sudden surge in the magic running through their ancestry, none can say. Tibbits have never existed in large numbers, and their tendency to spread across the world leaves them with a fractured, incomplete racial history.

Much like their feline ancestors tibbits exhibit independence, curiosity, and quickness of mind and body. They rarely form communities larger than two or three families, and even these small colonies rarely hold together for more than a few years. Shortly after reaching adulthood, a tibbit develops an intense desire to wander the world and satisfy her racial curiosity. Tibbits can be found wherever humans and other civilized humanoid races have established cities, towns, and colonies.

Among humans and other humanoids tibbits usually remain in their cat form. The stray cat that prowls a neighborhood, the mangy cat adopted as a temple's unofficial pet, and the lazy feline always close at hand at the local tavern might be tibbits. Driven by curiosity, tibbits love to remain in their animal form while observing humans.

Cynical observers contend that a tibbit seeks to spy on others. Tibbits hold that they merely like to keep an ear and eye out for any interesting bits of news. Tibbits are typically too chaotic, carefree, and impulsive to work as spies or hired killers. Upon overhearing a group of adventurers talking over a treasure map in hushed tones, a tibbit might be just as likely to shift into humanoid form on the spot and offer to join the adventure as she is to lose interest and chase down a juicy mouse she spotted across the tavern.

Personality: Tibbits, as befits their heritage, are moody, curious, and sometimes arrogant. Many tibbits prefer the comforts of a fine meal (whether a succulent rodent or a five-course feast in the lap of luxury), stiff drink, and a soft couch. Even the most decadent tibbit, however, eventually succumbs to the steady pull of its curiosity. A tibbit might spend years living off the treasures it won in adventure, only to suddenly strike out into the unknown once again.

When dealing with others, tibbits show a similar capability to change their attitudes and posture depending on their moods. A tibbit might act relaxed and languid one moment, alert and inquisitive the next. They tend to have a slightly distant, arrogant attitude toward others, as if as a race they share a colossal, secret joke over other intelligent creatures. Still, once a tibbit marks someone as a friend few other creatures match their devotion. A tibbit might complain about a friend's needs or tend toward laziness, but when trouble arises she is a dauntless ally.

Physical Description: In humanoid form, tibbits are small, stealthy, dark-skinned people with pointed ears and catlike eyes. Their hair tends to grow thick and long and males tend to grow sideburns. Their skin tones range from a tawny brown to black, but occasionally a tibbit has pure white skin. Their hair color matches the wide range of colors found in house cats, from pure white to striped silver to deep black.

Relations: Tibbits tend to regard other folk with a detached sense of bemusement. Much of their lore and common wisdom regarding men, dwarves, and elves filters through their guise as house cats. Thus, tibbits see how other races act when they think no one else is around. To a tibbit, every intelligent creature is a bundle of secrets just waiting to unfurl before them.

In general, tibbits find humanity's ambition, drive, and fiery passion intriguing. They consider dwarves overly dour. Elves strike them as kindred spirits, as tibbits appreciate that the long-lived races share a similar tendency to see issues from different perspectives. They adore gnomes and halflings and many good-aligned tibbits adopt such folk. More than one kobold or goblin party has descended upon a sleepy gnome village or halfling caravan only to find an enraged tibbit wizard waiting for them. Gnome and halfling folk who have benefited from such welcome surprises have strong traditions of taking care of stray cats and treating their feline pets as treasured companions.

Alignment: Tibbits have a strong tendency toward chaos and an equally strong lethargy toward moral issues, making the majority of them chaotic neutral. Carefree, decadent, and given to long periods of wallowing in luxury, tibbits can be maddeningly self-centered. Some tibbits tend toward proactive freedom-seeking, marking chaotic good as their second most common alignment. Such tibbits share many of their neutral brethren's tendencies, but a righteous struggle or a chance to spring a trap on evildoers rouses them to action.

Evil tibbits, particularly chaotic evil ones, are rare but dangerous. They use their shapeshifting ability to spy on humanoids for information useful for extortion schemes. Many of them work as spies and assassins, as their innocent, feline form makes it easy for them to slip into even heavily guarded areas. After all, even the most alert guard pays little mind to a cat. Some evil tibbits become powerful crime lords, observing their underlings and competitors in cat form and ruthlessly culling those who plot against them.

Tibbit Lands: Tibbits have no lands of their own. Instead, they dwell within civilized territories established by other folk. Any civilization that keeps domesticated cats likely houses colonies of tibbits within its cities.

Few tibbits make their identity openly known once they settle in an area. A tibbit is much more likely to remain in cat form as she travels through a city, although she usually keeps a well-hidden, luxurious apartment hidden in an out-of-the-way corner of town. Many tibbits become petty thieves, raiding pantries for fine foods, liquor, and other creature comforts.

Tibbits who travel the land might keep their humanoid guise to make dealings with other creatures easier. Even these tibbits prefer to pass themselves off as travelers from other planes, and they rarely publicize their ability to change shape.

Religion: Tibbits pay homage to the Cat Lord, a powerful creature who watches over all felines. They generally lack an organized religion, instead preferring to view the Cat Lord as a big brother figure and protector. Some clerics believe that tibbits are simply too arrogant and independent to shackle themselves to a deity, and few tibbits argue against this assessment.

The Cat Lord's domains are Chaos, Travel, and Trickery. Her favored weapon is the dagger.

Language: Tibbits speak Common or whatever other language dominates the area they settle in. The Feline language, a strange combination of purrs, hisses, and empathic transfers, allows tibbits to communicate with cats of all forms. Tibbits are born with the knowledge of this language.

Names: Tibbits tend to adopt names based on their physical traits and deeds. A tibbit kitten is given a nickname by her parents, one that reflects her temperament and appearance. When a tibbit comes of age she adopts a name of her choice. Tibbits tend to pick names from other folk, usually based solely on the sound.

Strangers and business partners use the name a tibbit picks for herself, while the tibbit's close friends and family use the original nickname chosen by her parents. A tibbit allows only her closest friends to learn and use her nickname. A nontibbit given such a privilege has received one of the highest honors a tibbit can grant to an outsider.

As a tibbit travels the world, she adopts a surname that reflects her experiences and important deeds. A tibbit usually changes her surname after such an event, but her true name uses all of her adopted surnames from childhood onward, and not just her latest one. When two tibbits meet, they share these long-form names to express their pasts with one another.

In general, tibbit names work for either sex. Whether male or female, a tibbit who has a short tail in cat form likely ends up with the nickname "Spiketail."

Adventurers: The life of an adventurer comes naturally to a tibbit, as her curiosity pushes her ever onward. While many tibbits satisfy this drive with travel to civilized areas and exploration of a city's corners, some tibbits want more out of life. "Adventurer" is seen as a respected occupation among tibbits, and they have a natural fascination for adventurers of other races. In some cases, a tibbit in cat form takes to following an adventuring band, concealing its true nature until an opportune moment. A tibbit fighter might spring from cat to humanoid form in time to drive off a group of orcs that threatens the party's camp. In this manner, tibbits prove their valor and demonstrate their unmatched stealth in hopes of winning a place with their unwitting comrades.

In cat form, the tibbit becomes size Tiny. Her size bonus to Armor Class and on attack rolls increases to +2, and her size bonus on Hide checks becomes +8. She gains a +10 bonus to her land speed. A tibbit suffers a -8 penalty to Strength (minimum 3) but gains a +2 bonus to Dexterity.

A tibbit's equipment usually transforms to become part of her cat body. She loses the benefits of any weapons, shields, armor, or robes she wears or carries. Items that require a physical apparatus to function, such as a ring or a pair of boots, shift to adopt a form suitable to a cat, such as a collar or anklet and continue to provide their benefits. A tibbit's cat form is unable to speak or use her paws to manipulate fine objects. She cannot cast spells with a verbal or somatic component, use scrolls, or otherwise activate magic items.

While in cat form, a tibbit gains the scent ability.

A tibbit slain in cat form reverts to her humanoid form after 1 round.

Any spell that reveals the true nature ofa creature under the effects ofpolymorph shows the truth behind a tibbit's cat guise. Spells that reveal magical auras but do not penetrate a polymorph spell reveal nothing special about a tibbit in cat form.

Aside from the changes noted here, a tibbit's abilities and game statistics otherwise remain the same. Note that anyone spotting a tibbit in cat form has a difficult time recognizing the feline as a tibbit.