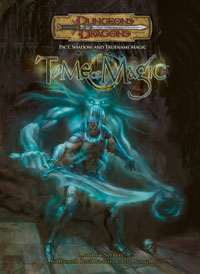 Three new magic systems for any D&D campaign.
Tome of Magic introduces three new magic subsystems for the D&D game. Any or all of these systems can easily be inserted into a campaign. Pact magic gives characters the ability to channel lost souls, harnessing their abilities to gain supernatural powers. Shadow magic draws power from the mysterious Plane of Shadow. Truename magic gives characters that learn and properly use the true name of a creature or object immense power over it. All three systems introduce new base classes and spellcasting mechanics. Also included are new feats, prestige classes, magic items, and spells.