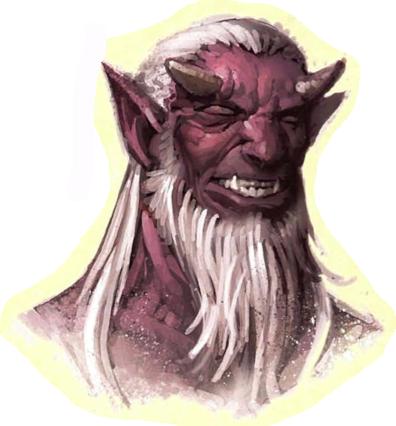 Originating on a distant plane, the diaboli appear to many humanoid cultures as nightmares incarnate. They have dispersed across the infinite planes as much to spread their creed of benevolent chaos as to escape the rampant horrors of an invading reality.

Diaboli hail from a demiplane just slightly out of phase with the rest of the multiverse. Called by humanoids the Demiplane of Nightmares, this realm borders coterminously with the Region of Dreams and the Ethereal Plane. Unfortunately for the diaboli and the creatures that share their frightening home, the boundaries between their reality and those of the Far Realm—a place that exists outside of reality from which pseudonatural creatures originate—seem particularly thin. As such, the maddeningly chaotic taint of the Far Realm constantly seeps into the Demiplane of Nightmares like a breached dam trickling water.

On their home demiplane, the diaboli act much as humans do on the Material Plane: they farm, hunt, build villages and towns, interact peacefully with some of the creatures they share their home with, and they violently oppose others. Some diaboli become philosophers of renown, while others skulk the dark alleyways waiting for their next mark.

Unlike humans, diaboli have a unifying belief in the superiority of anarchy. They build their societies around the belief that since they cannot provably define any one form of government as better than any other they must simply live without governments. Despite their chaotic natures, diaboli strongly believe in traditions and ancient mores that continue to maintain their societies. Along with these strong and repeatedly proven customs, diaboli hold together their otherwise free-willed societies with a mixture of traditions, taboos, customs, and a strong sense of fair play. "Do what thou wilt but harm none" unifies the diaboli and acts as the great truth from which all traditions and taboos grow.

Societies of diaboli on the Material Plane seem at once both oddly familiar and strangely disconcerting. They build their villages in a haphazard manner, seemingly without any consideration for the defense of structures— much less with an eye toward moving around effectively between the buildings. Their buildings resemble ruins, with beams and timbers protruding at odd angles from leaning stone walls. Various colors of paint cover random areas of the structures, camouflaging them somewhat from a distance.
While diaboli martial technology lags well behind the civilized races of the Material Plane, their more cerebral aspects of culture far exceed those of most races. They spare no amount of energy or wealth developing advanced forms of philosophy and art. Most diaboli promote a level of tolerance and generosity far more liberal and welcoming than any Material Plane humanoid race, with the sole exception of their attitude toward humans, whom they detest above all others. The diaboli view humans as hideous devils or demons in much the same way that humans view them.

Because interaction with the dangerous and unpredictable Far Realm is becoming increasingly frequent, the diaboli constantly develop techniques to combat the corrupting taint of that frightening plane. Many sages suggest the diaboli's losing battle against the encroaching taint of the Far Realm causes their immigration to the Material Plane. While some diaboli still live in the Region of Dreams, most have emigrated to the various worlds of the Material Plane as well as the Ethereal and Astral Planes.

Personality: In their own home realms, diaboli serve as the equivalent of humans. As such, they possess a wide variety of personalities. Unlike humans, however, the great majority of diaboli live chaotic, disorderly lives. The spectrum of personalities exhibited by diaboli is therefore somewhat narrower than that of humans, but still much wider in its possibilities than most other Material Plane humanoids. Diaboli generally reflect only the gentler, less frightening aspects of chaos in their personalities. Many reflect this chaos with extreme absent-mindedness, mild to severe mood swings, wild bouts of creativity, and generally mercurial natures.

Physical Description: Fearsome in form if not personality, diaboli often elicit reactions of fear or loathing from those who see them. Silhouetted at a distance, a diabolus might pass as a thin-legged human. Once details become apparent, any resemblance to humans quickly disappears.

The torso, arms, and head of a diabolus have humanlike musculature and structure, but its legs resemble those of a ram or goat. Diaboli also have long tails that end in small barbs. Small vestigial horns rise from the top of a diabolus's head and its elflike pointed ears stick out at severe angles. A diabolus's hands appear humanlike except they lack a fifth small finger, rather having three fingers and a thumb.
Diaboli skin color ranges from mauve and lavender to the deepest near-black violets. In addition to skin color, diaboli vary in the amount of hair they can grow. Bare diaboli grow no hair over the entirety of their bodies. Common diaboli grow white and silver hair just as humans do, and males often wear long but well-groomed beards. Hirsute diaboli also grow coarse, white, goat-like hair from the waist down. Diaboli of all three types share the same abilities; any differences among them form culturally. All diaboli have reptilian eyes ranging from angry reds to bright yellows. Their long tongues fork like those of snakes and provide the diaboli with similar olfactory clues. Wide, prominent noses dominate their faces.

Relations: Diaboli innately fear most humans and humanoids they meet and find the forms of such creatures repulsive. For their part, many humans and humanoids feel the same way about diaboli. Only rarely do the two groups put aside their revulsion of one another and make attempts to communicate and trade. Even after the diaboli and native humanoids set up peaceful lines of communication, a tension always exists between two such groups. At worst, this quiet unease leads to cool but respectful meetings, but even at best a gathering of diaboli and humanoids brings about an air of extreme politeness, as if both sides fear insulting or otherwise provoking the other.

Adventurers from both sides often make the initial steps of peaceful communication—many find it difficult not to befriend those with whom they frequently face lethal dangers. Because they themselves often live at the fringe of their societies, adventurers often judge a companion not by appearance but by competence, and most diaboli adventurers prove quite competent.

Alignment: A carefree chaos fills the hearts of diaboli and they constantly seek to spread the joys of such liberation among those with whom they interact. Freedom and spontaneity mark the lives of the diaboli,
but they seldom force their gently chaotic beliefs on others. This love of freedom marks them as almost universally chaotic good creatures. Some drift from the benevolent aspects of chaos—becoming engulfed or driven to horrible acts by it—developing into either chaotic neutral or chaotic evil. Those tiny few who forsake chaos for neutrality find themselves shunned and exiled. Neither history nor folklore record any mention of a lawful diabolus.

Diaboli Lands: In their native demiplane, diaboli form small pockets of relatively peaceful societies that can span several hundred square miles. They fill much the same position as humans on the Material Plane: vibrant, expansive, and relatively easy to work with. On the Material Plane they form small anarchic but peaceful communities far away from humanoids and other intelligent creatures.

Religion: As their home demiplane touches on both the Region of Dreams and the Ethereal Plane, and suffers the Far Realm's foul taint, diaboli have strong taboos concerning disbelief. They never take anything at face value, as mind-bending reality twists occur near their original homes so frequently. Diaboli lack deities as most humans understand them, and instead seem to worship ideas like anarchy, chaos, freedom, and wonder. Their religious practices lack dogmatic rote, and most diaboli worship alone and spontaneously. Diaboli clerics, although rare, do exist. They often choose from the following domains: Chaos, Destruction, Luck, Magic, Protection, Travel, and Trickery.

Language: Diaboli speak their own language, Diabolan. Diabolan words make frequent use of harsh, guttural hisses and the unique physiologic structure of the diaboli's forked tongue. While not difficult to learn, most humanoids of the Material Plane find mastery of Diabolan impossible. Most words in Diabolan contain soft "f" "s," "th," and "z" sounds. Many diaboli also learn to communicate simple ideas by twirling and positioning their tails in a sort of elaborate code. The purely visual diaboli tail code can convey even complicated concepts, but it takes roughly twice as long to express something in the diaboli tail code as in any spoken language. Any creature that can see a diabolus using the diaboli tail code may make a DC 10 Intelligence check to realize the diabolus is attempting to communicate. Any creature may learn diaboli tail code, although only creatures with tails of their own can "speak" it.

Most diaboli who make the journey from their plane learn to speak Abyssal first, as their forked tongues can most easily form the words of that language. This leads to the belief that an inherent evilness exists within diaboli society. A diabolus who speaks Common does so with a thick, snakelike accent.

Names: Chaos influences all aspects of diaboli life, including their naming patterns— whatever inscrutable patterns they might actually take. For the most part, diaboli have between two and four names, although some only bear one moniker and others might claim as many as twelve. No discernable convention exists for determining how many different names a diabolus might possess. Like humans, diaboli maintain a wide spectrum of names they use. Male diaboli names typically contain more consonants than female diaboli names. Even that "rule" lacks any sort of reliable application, however, as many males have names with no consonant sounds at all.

Family Names: If family names exist, no sage or scholar has discerned any indication that diaboli use them.

Adventurers: Most diaboli dislike violence and attempt to live their lives as peacefully as possible. Those who do take up the dangers of adventuring do so for several reasons. Many find themselves thrust into violence to defend their homes from fearful humanoids who raid and slaughter them. Others take up the trident in order to forcefully hold back the taint of the Far Realm that constantly threatens to seep into both their native demiplane and their adopted homeworlds. Finally, a few diaboli turn to violence for the same selfish or exalted reasons as humans: wealth, power, guardianship, love, lust, or an unquenchable hope that they can make a better world for their children.

Planes not on the Great Wheel

The diaboli's description assumes the existence of two unusual places in your campaign's cosmology.

The Far Realm: First introduced in The Gates of Firestorm Peak and frequently mentioned elsewhere (most recently in DRAGON #330), the Far Realm is a place of unimaginable chaos and insanity. Many of the creatures that live within the Far Realm have seemingly random anatomies—often with masses of wriggling tentacles or wholly alien appendages. Lovecraftian in character, the Far Realm is a veiled and unknowable parallel existence outside the Great Wheel from which maddening horrors and malignant intelligences seek to wreak their immortal plots upon the unsuspecting planes.